South Africa looked a lot different a year ago.

Within one year the conversation changed from how to fight “state capture” to stimulating a sluggish economy – and the execution of land expropriation without compensation.

There are new boards at Transnet, Eskom, SAA, and the SABC; a new acting commissioner at SARS; and a newly-appointed NPA head.

There are also four commissions of inquiry running concurrently in South Africa, all related to the abuse and “capture” of state resources in South Africa.

But South Africa still has many unsolved problems, from load-shedding blackouts to instability leading up to the May 2019 elections.

Insider South Africa looked back at the year, and found eight pivotal moments that we believe set the agenda in South Africa in 2018. After showing signs of a willingness to cling to his office at all cost, Jacob Gedleyihlekisa Zuma finally resigned as South African president late on Wednesday, February 14.

In his lengthy outgoing address, Zuma said he did not fear leaving political office, and that the ruling ANC should never be divided in his name.

“I fear no motion of no confidence or impeachment, for they are the lawful mechanisms for the people of this beautiful country to remove their president,” Zuma said.

Cyril Ramaphosa was elected the fifth president of a democratic South Africa the following day. In what is believed to be the world’s largest outbreak, more than 200 people died of listeriosis in South Africa.

Listeriosis, caused by listeria, is a flu-like disease which weakens the immune systems and causes fever muscles aches and diarrhoea.

Tiger Brands, the owner of Enterprise, ordered a national recall of the affected Enterprise products.

A class action against Tiger Brands was given the go-ahead in November. Patricia de Lille returned as City of Cape Town mayor in June after the high court dismissed a Democratic Alliance decision to axe her membership following a radio interview.

The Democratic Alliance made several attempts to investigate and remove De Lille, which included a failed motion of no confidence and investigations into her administration.

The Cape Town DA caucus went as far as to remove her powers in dealing with the city’s water augmentation schemes.

The party also introduced a controversial “recall clause” in its constitution, empowering it to recall its public deployees in a move seen directed towards De Lille. 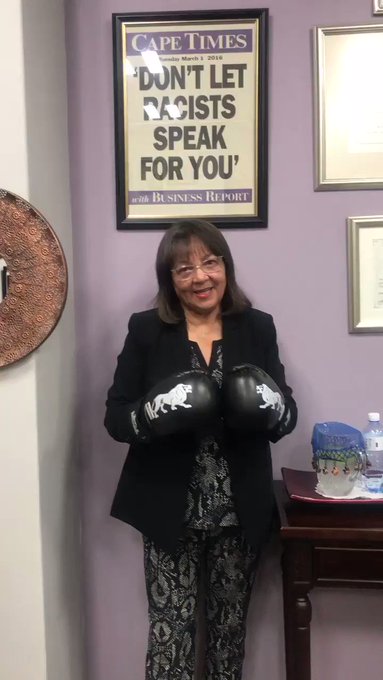 Next round! Let’s go!

De Lille finally resigned as City of Cape Town mayor in October after she reached a deal with DA leader Mmusi Maimane to drop misconduct charges against her.

She launched her new political party GOOD in November alongside former DA members in the City of Cape Town caucus. The ANC decided to expropriation land without compensation at its national elective conference at Nasrec in December – where Ramaphosa was elected president – and partnered with the EFF in February to vote for a motion to this effect.

Ramaphosa reiterated that expropriation should not be detrimental to the South African economy, despite his own investment envoy, former finance minister Trevor Manuel, saying the issue has scared investors. South Africans woke up on Thursday, August 23, to news that US president Donald Trump had instructed his secretary of state to investigate South Africa.

This after minority rights group AfriForum travelled to the US to lobby that country to act on farm murders in SA.

“I have asked Secretary of State @SecPompeo to closely study the South Africa land and farm seizures and expropriations and the large-scale killing of farmers. South African Government is now seizing land from white farmers,” Trump tweeted shortly after midnight South African time.

Trump had apparently watched a discussion on a Fox News show  where it was wrongly claimed that the South African government had started seizing property.

Trump said – without any proof to prove the claim – that President Cyril Ramaphosa had been “seizing land from its own citizens without compensation because they are the wrong skin colour”.

I have asked Secretary of State @SecPompeo to closely study the South Africa land and farm seizures and expropriations and the large scale killing of farmers. “South African Government is now seizing land from white farmers.” @TuckerCarlson @FoxNews

The presidency expressed concern over Trump’s tweet, with Ramaphosa criticising those “spreading lies and rumours”.

October: Tito Mboweni is appointed finance minister after Nhlanhla Nene is caught in a lie Ramaphosa accepted finance minister Nhlanhla Nene’s resignation on Tuesday, October 9, after it emerged that he met with the infamous Gupta family several times between 2009 and 2014.

Nene previously claimed he only “bumped” into the Gupta family on occasion.

His appointment was widely lauded by the private sector, with the rand strengthening steeply. Malusi Gigaba, once considered a Zuma-loyalist and possibly future President, resigned as home affairs minister on Tuesday, November 13, and resigned as a member of parliament two days later.

Gigaba was also under fire over his handling of the Oppenheimer-owned Fireblade private terminal at OR Tambo International Airport, meeting with the controversial Gupta family, and helping the Gupta family obtain South African citizenship. Global icons Beyonce and Jay Z performed – for the first time in 14 years – in Johannesburg, at the Global Citizen concert on Sunday, December 2.

The event turned sour when thousands were left stranded outside the FNB stadium with little to no security. Several muggings and stabbings were reported.

Trevor Noah and Oprah Winfrey were among the renowned speakers at the gathering.

Beyonce, later in an Instagram post, described the amount of “positivity and pride” she experienced at the event.

“Madiba, Johannesburg, and all of my African sisters and brothers, we hope we made you as proud as you all make us,” she said.

One thing is for sure: South Africa politics is never dull, the economy is looking up, but things can change in a second. Over this festive season, look back at your expenditure during 2018, your long-term financial goals and your personal road to reach financial freedom. Make 2019 a year where you take control of your finances, invest more and spend less on those credit cards and loans.

We wish you a Blessed Festive Season!

Until next time, take care.